Imagine being chosen to participate in building an architectural wonder that has changed the face of the city of Helsinki. The new Helsinki Central Oodi Library, or “ode” in English, opened its doors to the public on December 5, 2018, one day before Finland’s 101st anniversary of independence. This poetry in architecture, one of the most advanced structures in the Nordic countries, Oodi Library exalts the very elements of glass, wood and steel that work in balance as a free-standing masterpiece.

“Our aim was to create a new kind of public space in the middle of Helsinki,” says Architect Niklas Mahlberg, who managed the Oodi project at ALA Architects of Helsinki throughout the implementation phase. “We wanted to offer a warm and inviting welcome to the lap of the city, a type of large public living room, where people can come together to read, meet, watch movies, view exhibitions and enjoy many other types of activities.”

This monument in Finnish architecture began with ALA’s entry as one of 544 in an anonymous international architectural competition in 2012. In June 2013, they got the good news: they had won, and construction began in September 2015. 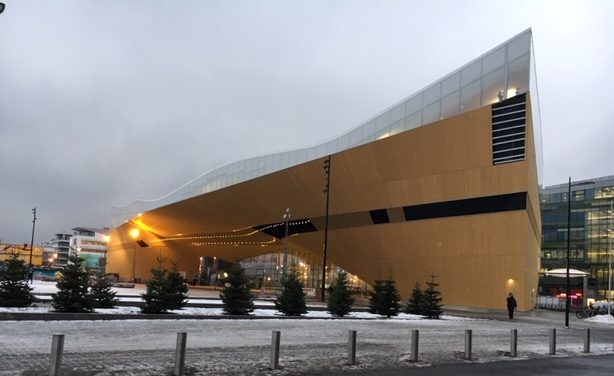 The style of each floor has been designed to elicit varying experiences, with three different floors intersecting with each other via escalators and curved stairways. The use of glass differs in abundance, style and function for each layer.

In the transparent parts of the ground floor, glass works to eliminate any visual boundaries between the street, public life and the inner library space. Huge sheets of tempered and laminated glass – both bent and flat – have been used to create the illusion that the outside blends into the inside as one continuous environment.

“Light plays an essential role on this floor,” Mahlberg says. “We aimed to have as few metal parts as possible to maximize transparency and let in the natural color of light,” Mahlberg explains. “We were really pleased with our suppliers who helped us design structural parts between the large sheets of glass that are almost invisible.”

The middle floor acts something like a book in between the cover of the others, offering a more private space for functions with varying and specific needs. 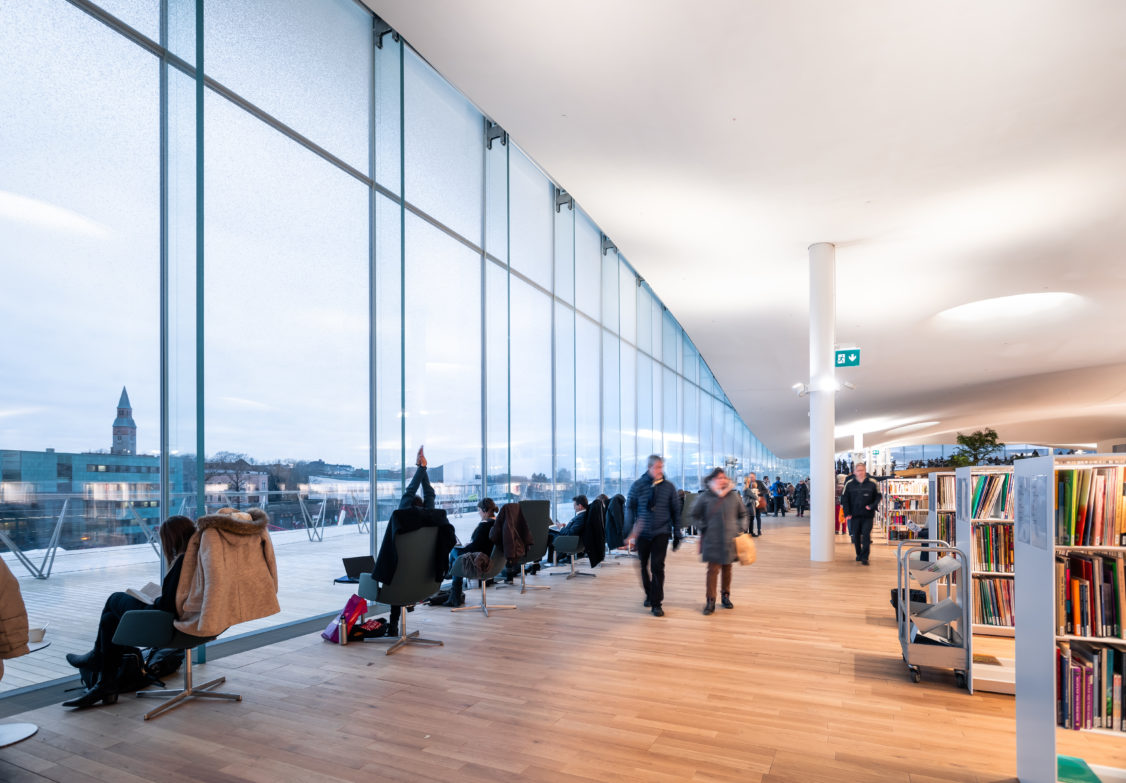 The top floor is book heaven, like being in the clouds, with panoramic views of the surrounding cultural and media hub buildings, including Finlandia Hall, the Helsinki Music Centre, the Sanoma House and the Kiasma Museum of Contemporary Art.

“Again, we aimed to create an upper space as clear and light as possible, almost so that the glass is invisible, without any noticeable steel parts,” Mahlberg says.

Wrapping around the walls of the top floor of triple-gazed white fritted glass, with every pane and print pattern being unique. 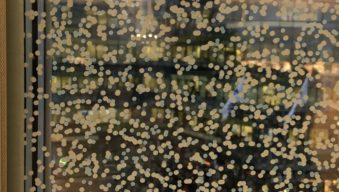 “We printed one white dot pattern on the outside pane and another on the inside pane to give depth to the pattern and cut the glare and excessive heat during the summer. A regular dot pattern would have caused a feeling of dizziness, known as the moiré effect. But using a completely random pattern eliminates this problem,” says Mahlberg. In fact, the printed result now closely resembles abstract snowflakes falling softly around the entire structure.

The white fritting was a challenge, as there were not many options to choose from for both the outside and inside of the building that could endure the Finnish climate conditions. Also, the large panes of flat glass used along the swooping, wavy roof presented their own set of issues.

The Estonian glass processing company Klaasimeister AS was selected to provide all flat glass panes for the façades, including IG units and tempered laminated glass, produced on a Glaston line. According to Kaido Toonekurg, Product Manager at Klaasimeister, the biggest challenge was producing all the types of glass needed for the project.

“We found out in October 2015 that we were selected as one of the suppliers. It took some time to find the right technical solutions that had been requested,” says Toonekurg. “But we’re used to working on many complicated projects all over the world. And we have most glass processes in-house, making us an attractive supplier.”

Klaasimeister has supplied flat glass to other well-known buildings in the Helsinki city center, so they know the surroundings well. “Still, each project brings something special. Oodi enabled us to reach a completely new level of complexity and magnificence that we’re proud to have provided,” he says. 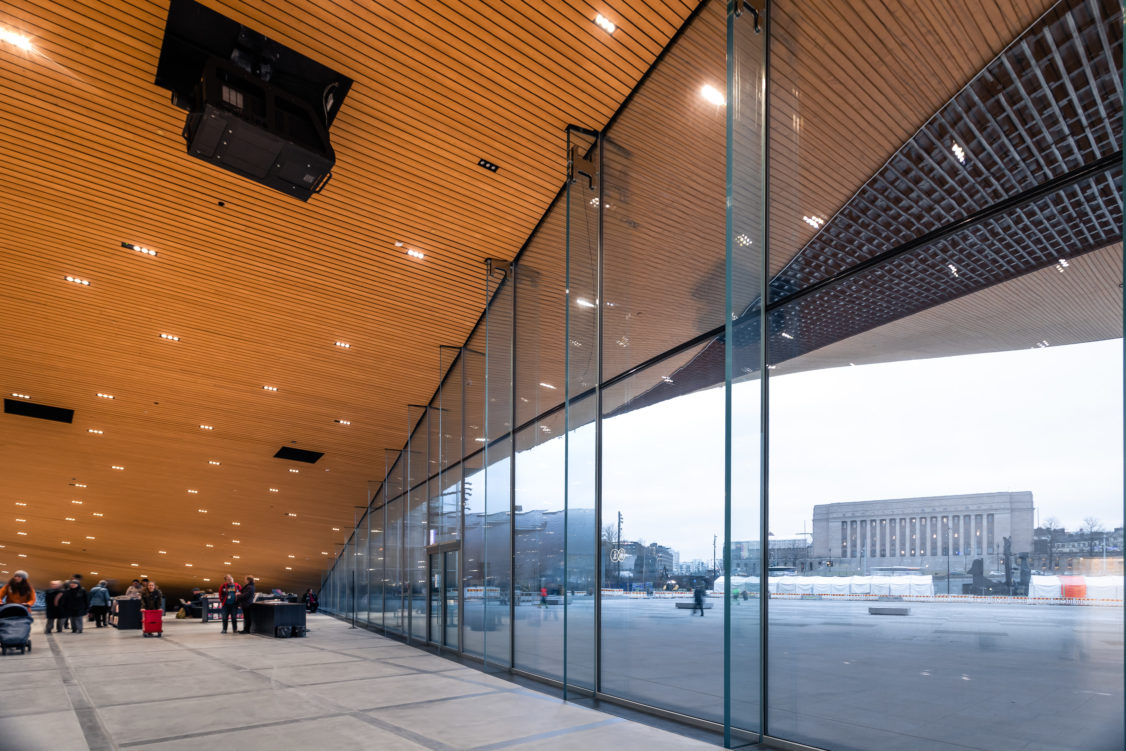 The huge and heavy bent tempered and laminated glasses were supplied by Tambest Glass Solutions Oy of Finland.

“When we start a project, we’re usually involved a long time before the actual building starts,” says Maija Kantelus, Sales Manager at Tambest. “ALA contacted us for proposals of what we felt could be possible to create in bent glass for Oodi. We knew there would be high demands on the glass, especially as it needs to withstand huge loads from the building itself. Thanks to our capability to handle such large glass sizes and with Glaston’s Pro Bend machinery, we were able to supply the glass for its demanding use.”

Although there were lots of changes along the way, a solution for the tempered and laminated bent glass was ready about a year before construction began.

“Installing the glass is always a risk,” Kantelus continues. “I visited the building several times during construction to supervise when the large heavy bent glass sheets were lifted next to each other to make sure they fit as they were planned.”

For Kantelus and her team, the Oodi Library is indeed a special reference case. “It’s a truly beautiful building, and I want to spend some of my free time there to really enjoy all it has to offer.” 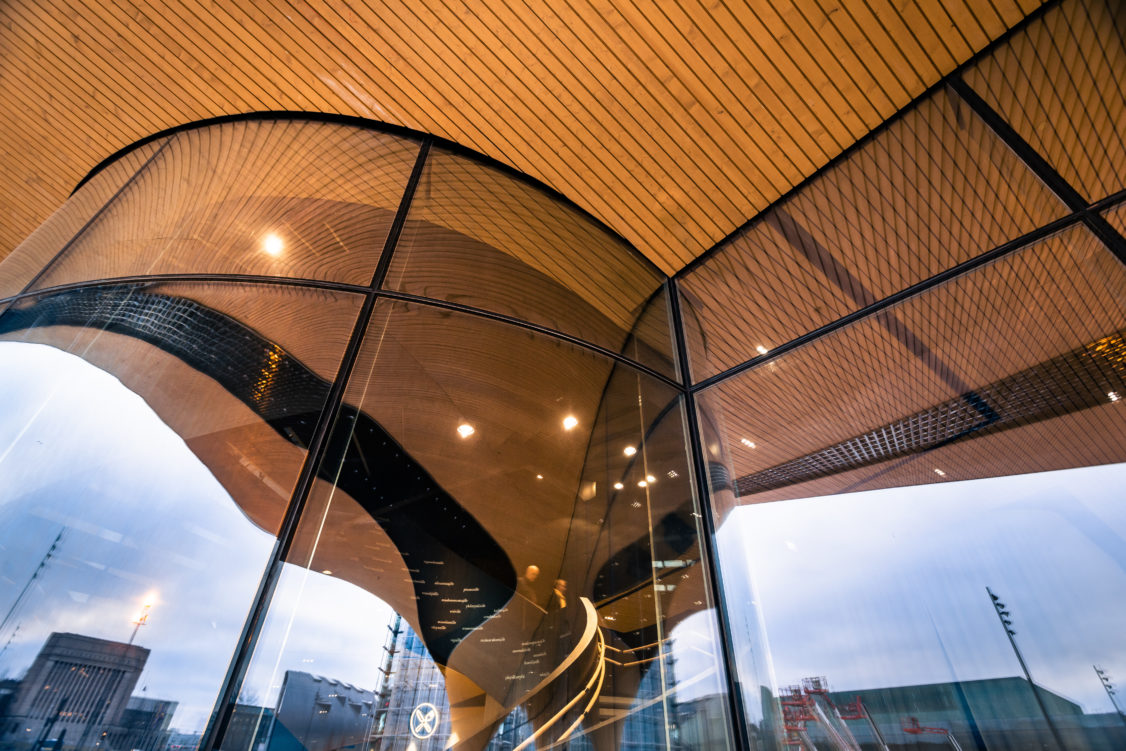 All structural and esthetic elements of the Oodi Library have been carefully designed for the highest energy efficiency. “The façade and roof, in particular, play a central role in keeping the building efficient and maximizing the use of daylight while preventing the interior from overheating,” Mahlberg explains. “In fact, we made simulations based on computer models before construction so that we knew exactly how much white fritting would be needed on the panes.”

The safety aspects adhere strictly to building regulations. “When you have 70-mm thick glass extending from the ceiling to the floor, it has to be safety glass. Each glass is toughened and laminated in a way that makes the entire structure stronger,” he says.

Glass clarity was an important issue. If standard green glass had been used, the hue would have been visible. “That’s why we chose low-iron glass with solar coating to cut back on the solar heat. Since solar films are normally dark grey, the glass print pattern helped us use lighter coatings,” Mahlberg continues.

Not only was the glass important to Niklas Mahlberg, but also how it worked in concert with the wooden façade.

“I was heavily involved for four and a half years in the development of the wood façade with Aalto University. The use of so much glass helps you see the wooden sculptured mass seamlessly from the outside to the inside,” says Mahlberg.

As the building is a combination of a bridge and a library, the movement of the building is especially challenging. The glass used on the top floors had to take this movement – building sway and temperature fluctuation – into consideration. Therefore, all the glass structures had to be designed to absorb this movement.

“The Helsinki Central Library Oodi is truly an exceptional structure,” he reflects. “It is simply extraordinary – and an architectural wonder that is gaining acclaim around the world!”

More about the project parties: 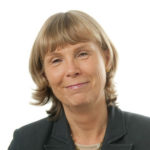 View all posts by AgnetaS