Today, we see numerous innovative laminated glass applications come to life because of new manufacturing technologies. We can see new interlayers, new fixing systems and new glass types being used in the latest laminated glass panels. Also, one of the trends is to make lighter glass modules by using thinner glass so as to still reach the required stiffness thanks to the interlayer. In a way, we can say that the use of laminated glass is at a major turning point. Mr. Ingo Stelzer from Kuraray has a long career with laminated glass, and I’m pleased to share with you some of his views on the laminated glass industry development.

In recent years, not only have architects discovered laminated safety glass as a building material, but they have also learned to better exploit its exceptional structural and design performance. New interlayers, like SentryGlas, with increased stiffness combine cost efficiency with high performance, thereby significantly widening the scope of applications for laminated glass – from private houses to luxury villas, skyscrapers and manufacturing facilities, and even cultural landmarks.

The new type interlayers are able to fulfill the architectural safety standards with a comparably lower thickness. The supporting structures used for curtain-wall façades can be designed to be a lot lighter and therefore much subtler in terms of their appearance. For example, when using a point fixation system – a common method of securing glass panels in façade engineering – the dimensions of the point fixtures themselves can be reduced, or fewer fixtures can be used per panel, either of which contributes to the transparent and lightweight appearance of the façade. Even in the event of a sudden failure caused by a nickel-sulfide inclusion, laminated safety glass made of tempered glass and the new type of interlayer will remain securely anchored in the point fixture. Overall, this constitutes the best preconditions for the realization of architectural designs with outstanding aesthetics and, at the same time, maximum security and protective effect.

The balustrade design shown below in a US baseball stadium is a good example. Since no metal framework is needed, there is an unobstructed view for the spectators. And since the film is stronger than standard PVB, the glass can be thinner and lighter.

In some architectural applications, the use of laminated glass has been limited because of added weight, material and costs in terms of the supporting structure. Also, the long-term behavior of constructions with exposed edges – in terms of their resistance to weathering – has been an issue associated with the use of a traditional (PVB) interlayer. Typical results of insufficient weathering resistance include edge delamination, which is the delamination of the interlayer at the edges of the glass panels, haze development or discoloration, also known as yellowing that appears due to the effects of rainwater, cleaning agents and UV rays in sunlight. These effects, both in combination and individually, limit the lifetime of the glazing and can render its use ultimately unacceptable.

In contrast to PVB, the appearance and condition of laminates made with new type of films, such as SentryGlas, remain almost unaltered despite exposure to such conditions, as demonstrated in outdoor and laboratory testing.

This new interlayer type is more expensive. However, because premature replacements of panels or even façades are highly unlikely, it becomes an even more cost-efficient solution during its lifetime.

The supporting structure’s load capacity is typically a limiting factor when considering renovation projects or the later addition of glazing to a building. High safety standards, requiring the adoption of mainly thick, and therefore heavy, laminated glass constructions, has often prevented building owners from realizing the energy-saving and protective potential of a curtain-wall façade. Today, laminated safety glass with a stiff and strong interlayer, which is on average 30% to 40% lighter yet offers the same safety performance, could make such modernization projects possible.

Below, is a picture of a façade renovation project from Germany, belonging to Fraunhofer-Gesellschaft. The original panels were replaced with laminated safety glass. In the event of breakage, this offers the advantage that the glass fragments remain adhered to the interlayer until the panel can be replaced. Traditional laminated safety glass with a PVB interlayer would have been too heavy for the supporting structure.

It is interesting to think that by actually utilizing fewer resources with thinner glass, lighter modules and lower transportation costs, we actually gain better performance in terms of lifecycle durability. Also, the market for renovation is huge and is becoming even larger with new innovations like SentryGlas that lowers the bar for renovation projects.

Today, we can see architects specifying SentryGlas in many projects. It is worthwhile for glass processors to get familiar with these types of interlayers that will be part of more project tenders in the future. 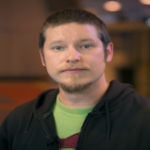 View all posts by Jussi Niemioja