After cleaning the tempered glass panes which were recently installed by the contractor, we realized that 30% of the panes have ‘ghosting’ exactly like white haze. Will this phenomenon get worse over time, and can it spread all over the surface after a period of time? Does it have an effect on safety and durability of the pane? Greenhouse, where these glass panes are installed, is a humid environment, and some chemicals are used from time to time.

On new glasses, this effect is most likely white haze. So your assumption is likely correct. White haze is caused during the tempering process. Usually, the reason is that there is some residue on the rollers in the furnace, which is then causing very small cracks or scratches on the glass surface. These can be seen then as white haze.

White haze doesn’t typically spread on the glass. But because we’re talking about the scratches, it is possible that, for example, in the greenhouse environment, you would be seeing this kind of effect where the cracks seem to be growing. This is caused by the fact that the chemicals are going into those scratches and wearing them out over time, and this makes it seem like the effect is growing.

But this is more of a localized phenomenon, so the haze doesn’t just appear all over the glass suddenly. In theory, it is possible though that you would have some new scratches in other areas of the glass, and the same phenomenon can happen to those as well. So you could be seeing the haze effect in other areas of the glass as well. But if we are talking about this kind of effect happening, this can only be happening in a span of years and not days or weeks. So it would take a long-long time before you actually see anything on the glass.

The second part of your question was regarding the safety and durability of the glass. The safety aspect is actually not affected at all. The glass will still be behaving like normal safety glass when it breaks. But when you have scratches on the glass, these always weaken the glass surface a bit, and the glass becomes not as durable as it used to be. But this is still a minor effect. Therefore, the glass will most likely be behaving as it supposed to even if you have scratches growing on the surface. 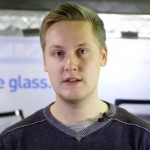